Hunters Woods Elementary School opened on September 2, 1969, with 19 teachers and 612 students. Our first principal was O. Stuart Chaplain, Jr. Hunters Woods was only partially completed when it opened, with just 15 of the planned 33 classrooms ready for use.

Hunters Woods opened without indoor plumbing, without half its roof, without a cafeteria, a gymnasium, playing fields, sidewalks, air conditioning and a host of other amenities. By the end of that first week, I had staff members in the office in tears, telling me they didn't think they could go on.
~ Principal O. Stuart Chaplain, Jr.

Despite the difficulties, school staff and students adapted to these challenges and learning thrived. Construction continued throughout the 1969-70 school year and into the next fall.

As originally designed, Hunters Woods had a total capacity for 990 students. By June 1970, enrollment at Hunters Woods had jumped to 912 students. Our school began its second year with 33 teachers and approximately 1,000 students and ended the school year in June with 1,306 children enrolled. Rapid student enrollment growth was driven by the continued development of Reston which drew many families with young children to the area. School-age population growth led to the opening of four elementary schools in Reston in the 1970s: Forest Edge in 1971, Dogwood in 1974, Terraset in 1977, and Sunrise Valley in 1979.

During the 1960s and 1970s, an educational philosophy called “open schools” became very popular among educators. Most of the new elementary schools built in Fairfax County during this era, including Hunters Woods, were designed as open schools. Open school classrooms were built without doors and were clustered around "pods" that could be divided with moveable partitions into separate learning areas. Principal Chaplain described it best:

The school is divided into several learning areas where a group of classes share space. Teachers work as teams with children grouped according to their differing abilities. There are also some closed classrooms where teachers work with small groups of learning disabled students.

Open schools gradually fell out of favor and the open classrooms at Hunters Woods were enclosed during a subsequent renovation.

Did you know that the design for Hunters Woods Elementary School was used to construct two more elementary schools in Fairfax County? The schools were Groveton and Laurel Ridge, both of which opened in 1970. Hunters Woods was designed by the architecture firm of Caudill, Rowlett and Scott, Inc., and was built by the Jenkins Construction Company at a cost of $1.2 million, a hefty sum in 1969.

During the 1970s, as immigrants from Southeast Asia and later Central America began to arrive in Fairfax County, Fairfax County Public Schools (FCPS) began to offer specialized instruction to meet the needs of these children. Today, we refer to this program as English for Speakers of Other Languages (ESOL), but its forerunner, English as a Second Language (ESL) was pioneered at Hunters Woods in the early 1970s.

In 1981, Principal Chaplain left Hunters Woods and was succeeded by John W. Quaintance. Quaintance, who had previously served as the principal of Springfield Estates Elementary School, led our school until 1984. In 1984, Gioia Caiola Forman became Hunters Woods' third principal. She came to Hunters Woods from Clermont Elementary School where she had served as principal for five years. During her principalship, in 1986, a previously unknown basement was discovered at our school. The basement was built in error by our school’s builder and had been sealed off. Then FCPS Assistant Superintendent of Facilities, Al Hlavin, reported to the School Board that "because of over-excavation there was indeed a 15-foot-high rough crawl space, equaling perhaps six or eight classrooms, under the building. He suggested that only access, flooring, and ventilation systems would be required to make the space usable." And that's exactly what the School Board chose to do with the space. The new classrooms were completed during the 1987-88 school year.

The Arts and Sciences

From 1988 to 1999, Linda Goldberg served as the fourth principal of Hunters Woods Elementary School. It was during her principalship that Hunters Woods became a magnet school for the arts and sciences. The magnet program began during the 1994-95 school year. More than 400 parents applied for the 110 slots available to children living outside the Hunters Woods boundary. During the first year students had weekly art classes, were given instruction on such topics as the physics of toys, and each classroom had a computer with an internet connection. In June 1997, the Mellifluous Mustang Opera Company performed "Out of Time: An Anachronism" at the Harris Theater on the campus of George Mason University. The opera was written, produced, and directed by Hunters Woods students, who, in addition to performing on stage, were responsible for setting up the microphones, directing the set changes, and running the sound and light boards. Our partnership with George Mason University still continues to this day. 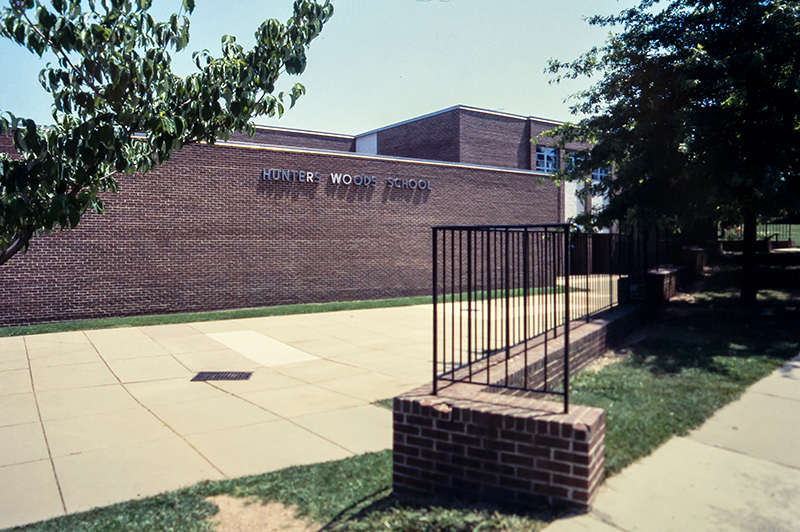 During the development of Reston, founder Robert E. Simon envisioned seven village centers for his new town, each with its own theme. Only five were built, of which the Hunters Woods Village Center was the second. Hunters Woods was given an equestrian theme. The community originally had two stables for horses, indoor and outdoor riding rings, and bridle paths which wound through the wooded landscape.

Student-drawn illustrations of the mustang have been featured on our yearbook covers as far back as the 1970s. Color printing was far more expensive in those days, so early yearbook illustrations were printed with just one or two colors. Learn about Robert Simon's inspiration for the Hunters Woods Village Center's equestrian theme in this video produced for Fairfax County Public Schools’ cable television channel Red Apple 21.

In 1999, Stephen Hockett was appointed as our school's fifth principal. He previously served as an assistant principal (AP) at Hunters Woods, and led our school until 2005. During Stephen Hockett's second year as principal, construction began on a new addition and building-wide renovation to our school. The project was completed in the fall of 2003 at a cost of $7.7 million. During the renovation, 12 new classrooms, a black box theater, a basketball court, and a new gymnasium were constructed, and our main entrance was moved to the second floor of the building.

The original open school layout created classrooms without walls, and walls without windows in an attempt to blend the school in with the landscape. I guess they didn’t appreciate the need for natural light. The new Hunters Woods is bright and airy, complete with interior and exterior windows and skylights, many skylights.
~ Principal Stephen Hockett

In 2005, Principal Hockett was succeeded by Olivia Toatley. Toatley had been an AP at Hunters Woods when Hockett was principal. She led our school until 2012 when Emily Cope, herself a former Hunters Woods AP, was appointed to the position.

The lyrics and music of our school song were written and composed by Trish Fraker in 1984, and are still in use today. 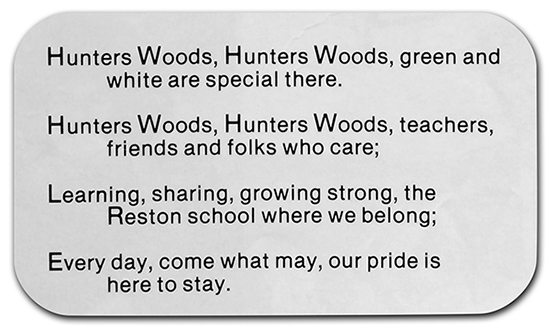 Long before Hunters Woods became a school for the arts and sciences, extra-curricular and co-curricular clubs provided students with an opportunity to express their creativity. The Guitar Club, pictured below, was a popular club in the early 1980s.

Reading Superstars was a popular club at Hunters Woods in the late 1970s and early 1980s. Students in the club were encouraged to read one book a week during each nine-week grading period. At the end of the grading period, students who completed the reading were given a certificate. Students who read two books per week also received a certificate and became a member of the Superstar Team. Students who read two books every week for the entire school year were inducted into the Reading Hall of Fame. Students in the Reading Hall of Fame had their picture taken and their photograph was added to a scrapbook.